Three months ago, I visited Madison, WI for the first time for a site visit at the headquarters of Sub-Zero, Wolf, and Cove. Since then, I haven’t really stopped talking about Madison. I couldn’t wait for the rest of the team to experience what I did back in May.

Last Monday, the four of us (Vera, Kameri Johnson, Olivia Mann, and myself) made the trip from Augusta to Charlotte and Charlotte to Madison. After an afternoon of flying, we finally made it to the Edgewater Hotel around 10:00 PM and parted ways to our separate rooms to unwind a get some sleep. Shortly after finding my room (which, although dark outside, I could tell boasted another gorgeous lakeside view), there was a knock on my door. Our too-kind hosts from Sub-Zero, Wolf, and Cove treated all four of us to a welcome gift of cheese and chocolate! 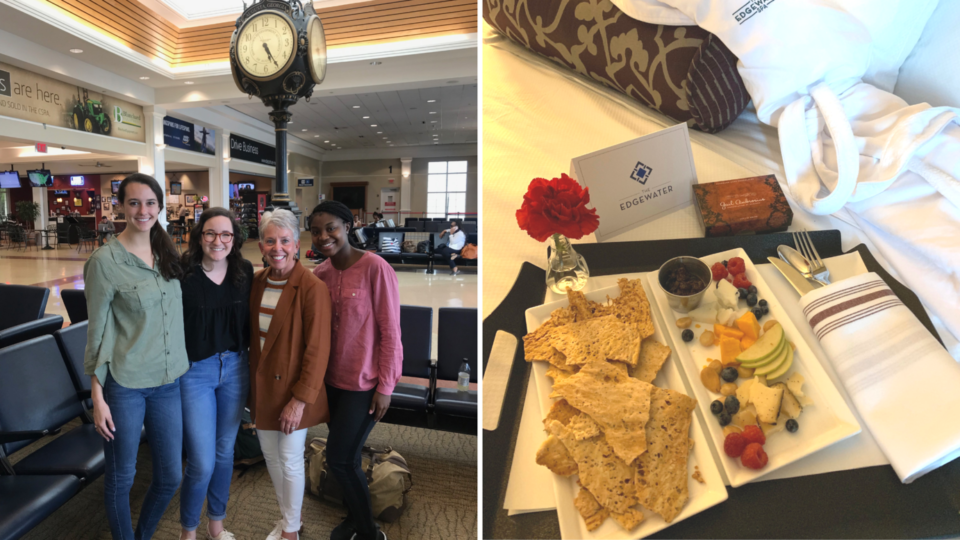 Tuesday morning, we emerged from the hotel around 7:30 to a pleasant Madison morning in the 60s. Admittedly although there were many things we were looking forward to in Madison, the weather might have been at the top of the list. The high temperatures in Augusta have hung around the mid-90s for most of the summer, so highs in the 70s were a welcome escape. I even packed sweaters–SWEATERS!–for nighttime.

Anyway, the three of us who aren’t Vera climbed into our pickup car and headed out to Fitchburg. We walked into the barn to find a meticulously put-together filming setup. Cords, monitors, and cameras covered most of the bottom floor of the barn. I reconnected with the media team I had met in May and introduced them to Kameri and Olivia. Before long, Vera arrived and we were out in the gardens to film b-roll for the show. 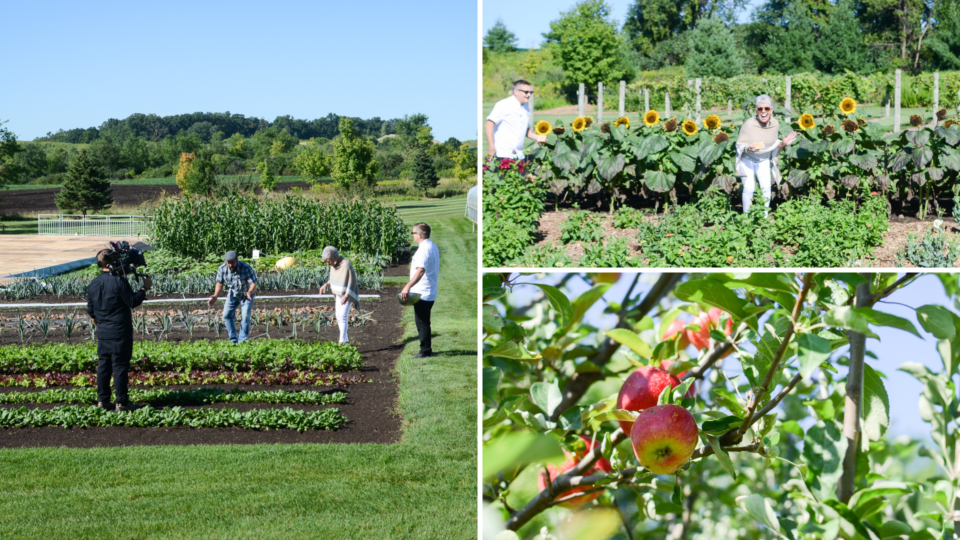 My site visit fell at the very beginning of a long-awaited spring, so there was quite a bit of transition in the Harvest Haven garden. The difference three months make! The greenhouse had been completely flipped from hearty winter greens to rows and rows of different types of tomatoes. Many of the plots had been cleared and replanted. The garden now boasted corn, herbs, sunflowers, root vegetables, squash, a pollinator garden featuring gorgeous flowers, and too many other items to name. 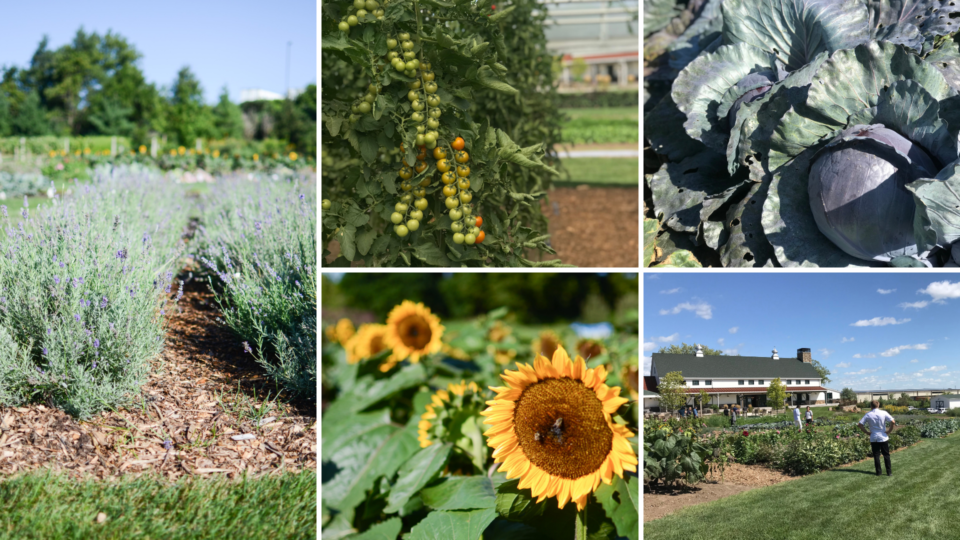 The camera crew wheeled out a mobile monitor to the garden so we could see what the cameras were capturing. From the very first shots of Vera and Chef Joel Chesebro in the greenhouse, I knew the episodes we were filming would be two of the best we’ve ever made. Tuesday was supposed to be mainly rehearsal, filming b-roll, and completing a few of the “smaller” bits of filming (like the Vera’s Corner intro and the overview segments), but we ended up knocking out our first episode that day. The energy and excitement in the room during filming was something I’ve only experienced a few times in my four years working on the show. 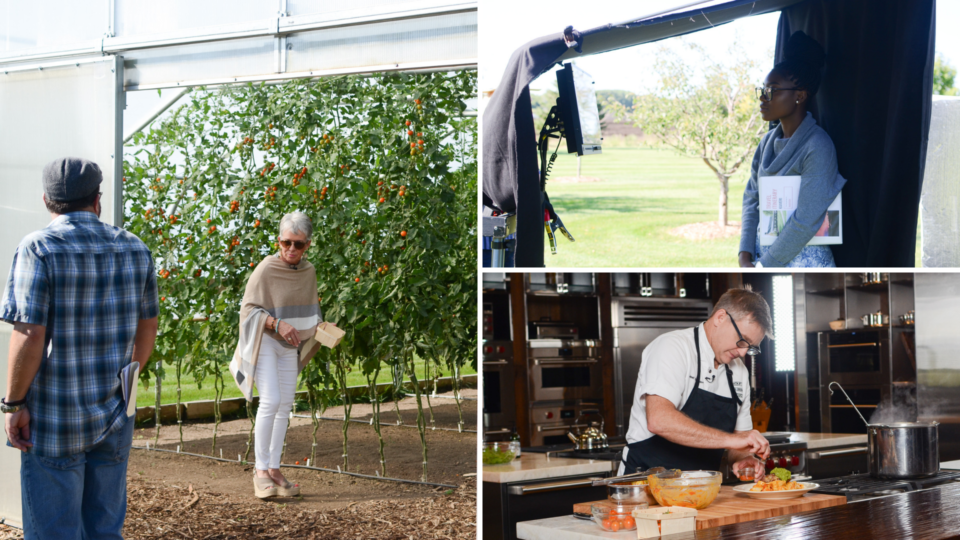 Along with the massive crew on-hand to help with the show, our onsite guests included a few familiar faces from the sales side of things at Sub-Zero, Wolf, and Cove: Will Huffman, VP of sales for Sub-Zero Group Southeast, our go-to guy, and the one who got our partnership rolling in the first place; John Bergquist, President of Sub-Zero Group Southeast and my site visit companion; and John Cooper, Regional Sales Manager and fellow Georgia resident who Vera and I met in Charlotte last summer. Our team had the best time with these three guys behind the scenes during filming and over dinner. (Somehow we managed not to get a picture with them. We’re bummed!)

Tuesday night they introduced us to the Tornado Room in downtown Madison, a 20-year-old steakhouse whose interior decor has been around way longer (maybe 1940s?). Here we enjoyed shrimp cocktail, homemade bread, including biscuits that made me forget I was in the midwest, wedge salads as big as our heads, crab bisque, and steak. At the suggestion of John Cooper, I ordered the NY strip (twist my arm!). We left around 10:30 PM–11:30 to our east coast brains–and I fell into bed full of steak, ready for Wednesday, and very happy. 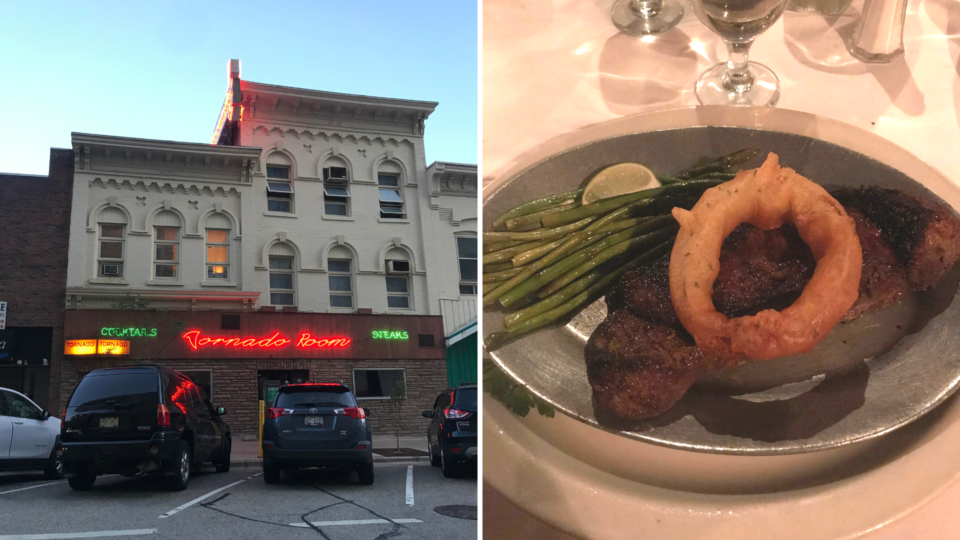 Wednesday brought an extra set of hands–Claire Chappell, a UW Madison student studying Strategic Communications. Her mom attended one of our adult cooking classes earlier this year and got her in touch with us when she heard Vera talk about filming in Madison. She jumped right in as we knocked out our second episode, which focused on Thanksgiving recipes. At lunch, we shared the finished recipes we made on the show. Nothing like turkey, squash gratin, and apple crisp on a warm August afternoon!

The Wisconsin team had a surprise at the end of lunch–although we were all pretty much stuffed on the food from the show, Joel’s culinary team trotted out their version of Vera’s Carrot Cake from the cookbook, made with their very own Harvest Haven carrots. Just another example of this team going above and beyond for us! 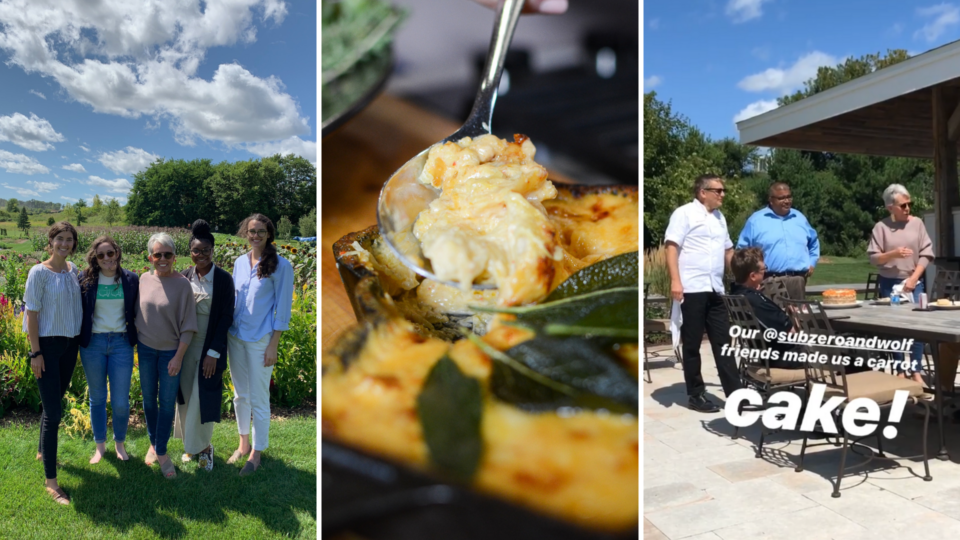 A little more b-roll in the garden ended our final filming day, several hours earlier than we expected. Much to my delight, this meant we had a little time for a walking trip to downtown Madison! After being dropped off at the Edgewater, our team reconvened in the lobby to head down to Capitol Square–more specifically, Fromagination, the cheese shop/slice of Heaven that hadn’t left my thoughts since May. Half an hour later, I had three new converts.

That evening, we met at the Statehouse for dinner, the Edgewater’s restaurant-in-residence. We were joined by our three dinner hosts from Tuesday night and also had the immense pleasure of dining with two VIPs–Jim Bakke, President & CEO of Sub-Zero, Wolf, and Cove, and his wife Sue. We spent the evening looking out over Lake Mendota, talking about the show, and sharing a fabulous meal.

By the time we were loading up to leave Thursday morning, our heads were spinning with the unbelievable experience we’d had in Madison. I think the question we all kept coming back to was “What did we do to deserve this?” As a small team in a non-metropolitan city, it’s easy to feel like a little fish in a very big pond. Some TV stations won’t give you the time of day, some potential sponsors never return your email, and some guests won’t accept your invitation.

However, if you consistently put in the work to improve and grow, sometimes you cross paths with someone who sees the value in your work. That’s what happened when we connected with Sub-Zero, Wolf, and Cove. Our show may not be in every town in America, but we treat each episode as if it was. I think this dedication reminds our friends at SZWC of their own company–the scrappy determination to get better whenever we can. 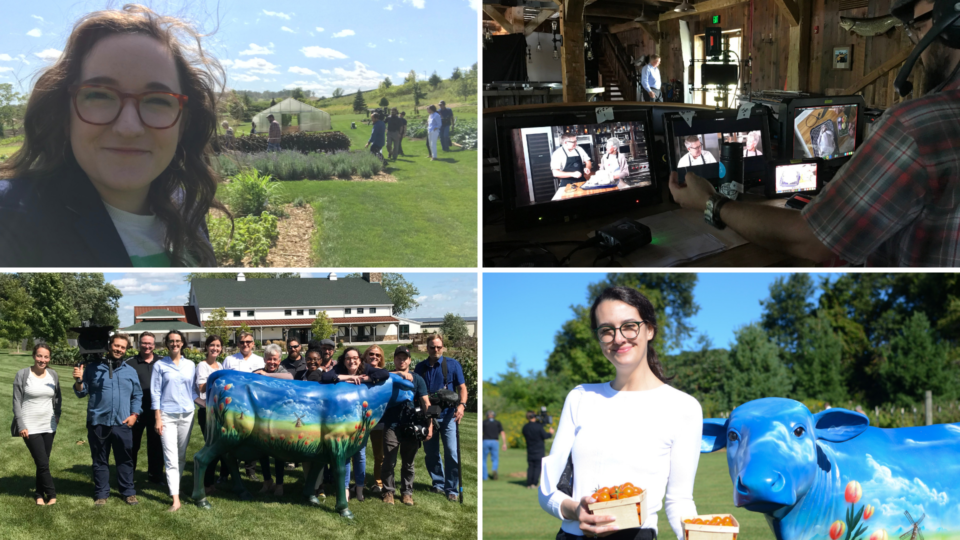 Thanks again to everyone we encountered in Madison! Viewers, hold onto your hats, because these episodes are going to blow you away!